Whales songs inspire poets to write
happier memories, I wish to recall
serenity rolls in on waves of light

Billowing clouds, hope sails tonight
open your eyes, experience it all
serenity rolls in on waves of light
over the horizon dreams take flight

author's note:  I saw this painting
and was inspired by the light

“I had never been so close to grass before. It towered above me and all around me, each blade tattooed with tiger-skins of sunlight. It was knife-edge, dark and a wicked green, thick as a forest and alive with grasshoppers that chirped and chattered, and leapt through the air like monkeys” (Cider with Rosie)

sunlight flutters upon warm flesh
lost in a maze of shamrock green, I  wept
tigers prowled in thick lush fields
on the wings of June, we finally slept

written for dVerse writing to the
prose of Laurie Lee hosted by
Laura.

form quatrain
I put my own spin on it

It's the first day of summer, she awoke with a heavy heart.  The dream-world
can be so unkind.  She wrote in her journal. Today, I am done chasing rainbows.
She drifted off to work with dark clouds in her eyes and a storm over the
horizon.

Later,  that afternoon, she declared  "I no longer have faith in people or the universe. Nothing is real and I will no longer play the fool".  Then the rain came it poured and she cried, "great, rain to match this foul mood', but inside she heard a voice "why have you turned away?".  She shook her head and thought, I am no longer listening, do you hear me, no more am I chasing rainbows. 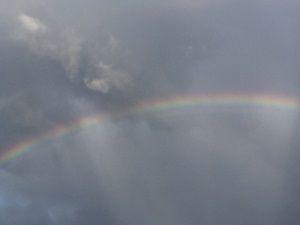 Dark  clouds of the day slowly  parted and the sun peeked with some needed light. She looked around and sure enough a rainbow began to appear.  "NO", she

shouted, I am done chasing rainbows".  As she was saying these words her car
seemed to follow the rainbow, then it became a double rainbow.  Hmm, she
thought creator is playing with her heart.  She tried to ignore the signs but, that
rainbow seemed to continue to grow before her eyes.  "Okay", she said and pulled her car over. "A couple of photos and that is it".  The rainbow appeared brighter as if putting on a show just for her.  She shook her head slipping back into her car. 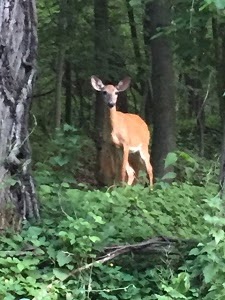 Watching the clouds dissipate there was a sense of tranquility, she knew
in her heart another sign would come and  it did.  Three deer came out of the woods just as her car rolled down the home stretch.  She stopped to gaze at their beauty. One came forward and she spoke to it from her car.  "Why are you here my little friend".  The deer's ears seemed to perk up as she spoke.  I will take one photo,  she fumbled with her cell phone.  She felt she had stepped into another realm of time. " OKAY, Okay...but, I am still not chasing rainbows', she exclaimed.  The deer seemed to nod at her, puzzled she formed a hint of a smile.  You  are a beautiful creature that much is true and blew the deer a kiss and then he sprinted away. 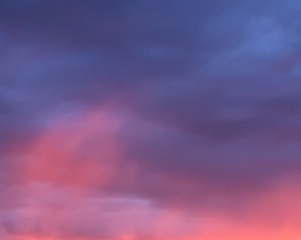 She arrived home, feeling unsettled. What is going on today, this first day of summer? It was nearing twilight and she glanced out the window the sky was a brilliant hue. Now, what?  She tried to ignore the call but, then thought it can't hurt to take a walk. Slipping on flip flops and grabbing her phone she trudged down the road. The jeweled sky was magnificent as she captured the moment. Creator really was phenomenal, she thought! She was about to turn around, but something inside beckoned her to continue there is more to see.  Glancing at her shoes, moccasins would have been a better choice  for the journey, she thought.  Onward she went to the sound of flip, flop..flip,  flop.. 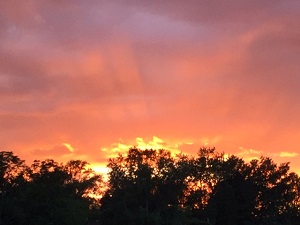 The sun dipped beyond the horizon as she continued her walk.  She stopped at the weeping willow she reflectively stated "I cried today willow, I am no longer chasing rainbows or dreams"  "What do you think"?  The willow boughs just blew in the breeze tangling in her hair.  She whispered.  "I am not practicing balance today" then she wandered away.  Turning the final bend, the heron is somewhere waiting.  Sure enough,  there perched on a barren  branch the heron stood guard. Pausing to breathe in the moment. " You are certainly a bird that cannot be caged", she said, pondering. 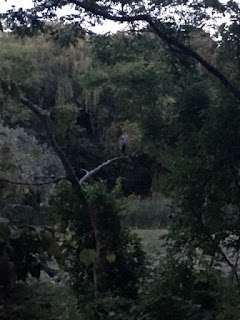 Sighing, she  could not  deny the signs sent.  So many wonderful gifts were
given today but, she felt tired and no one listens to her anymore.  She's just a fool who believes in mystical and magical happenings.  She stood there and cried and the heron didn't flinch in the twilight air. Cupping her hands over her eyes, she could clearly see it was time to move on. 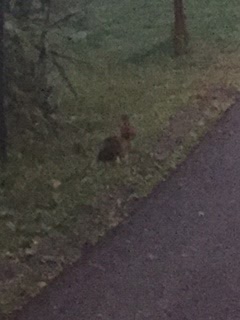 Arriving at her road sat one more surprise, a bunny eating some grass.  "Really", she said, inquisitively.  You have certainly pulled out your bag of magic tricks today . Focusing she took one last photo in the fading hint of light.

Silently, walking up the street, she said  'I am grateful for all the gifts, but I am still no longer chasing rainbows or dreams, it's a difficult road"

Late that night, cocooned in her bed,  she closed her eyes, murmuring  "why do you gift me all these wonders, my wings are broken and my heart heavy" .  In that moment she realized she didn't walk alone.

Good night she said...tomorrow is a new day!

author's note: Did you ever have a day filled with unexplained happenings? Do you feel there is more out there then meets the eyes?

I am a gardener of dreams
nurturing those who have lost
their dreams, weeding out
doubts  that try to
strangle potential

I am a gardener of dreams
my garden is filled with wild
and cultivated flowers...
each unique with special
needs

Daisies, roses, sunflowers,
moon-flowers, dandelions
violets, tulips each has
a reason to shine in
the light

I am a gardener of dreams
carrying tools of the trade
spade, rake, spray bottle
and knee pad all to help
make the journey easier

sharing with poets-united-midweek-motif-gardens
Thank you for visiting
wishing your fruitful dreams
Posted by Truedessa at 9:21 PM 14 comments:
Email ThisBlogThis!Share to TwitterShare to FacebookShare to Pinterest
Labels: dreams, gardens


written for dVerse
to the artwork of J Hurlbert
Thank you for visiting!
Posted by Truedessa at 8:43 PM 9 comments:
Email ThisBlogThis!Share to TwitterShare to FacebookShare to Pinterest
Labels: Bluebird's Journey, Jackie Hurlbert 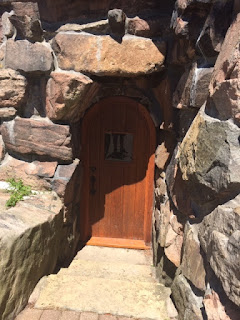 Follow the pathway to new possibilities
take a chance open the door before you
don't  fret about what's on the other side
be bold, pull the handle, step forward
rattle the hinges of your imagination
the hell with regrets, make the journey
count today